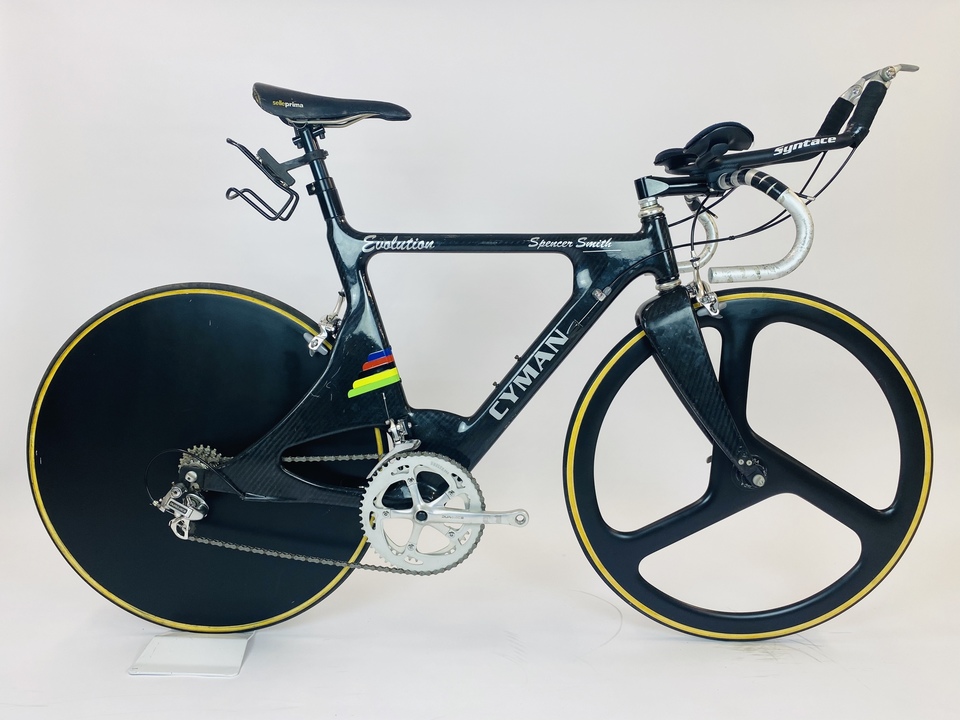 1993 Cyman
This bike belonged to 1993 World Triathlon champion, Spencer Smith. In 1994, Smith was having a horror year, his form seemed to have disappeared, and he had broken a big number of these Cyman frames. The Cyman was the brain child of a couple of ex Formula one technicians, who thought they could build a better bike than anything out there. There is no doubt this was one of the most aerodynamic bikes of the time, but they were fragile, and the brand did not last long. A chance meeting for Spencer with father and son team, Max and Paul Allen, in 'Gary's wheel world' bike shop in Encinitas, California, changed everything. Max had risked it all, with a trip to America to sell their bikes, with no success, but on the one day Max and Paul were in the shop, that all changed. Spencer entered the shop and Max stepped up and offered him a ride on their bike. The rest is history, Paul fitted Spencer, then built him a bike. Within a month, Spencer had won his first triathlon of 1994 (snapping a streak of DNF's) and going on to dominate the 1994 Word Triathlon Champs. This Cyman was given to Max and Paul as part payment for the frame they built Spencer. I have recreated the bike the same as Spencer rode it. The seat post and saddle were Spencer's so stay unchanged from when he last rode the bike. It has been fitted with full Shimano Dura Ace groupset, drop handlebars and Syntace Aero bars , rear disc wheel, and front tri spoke.